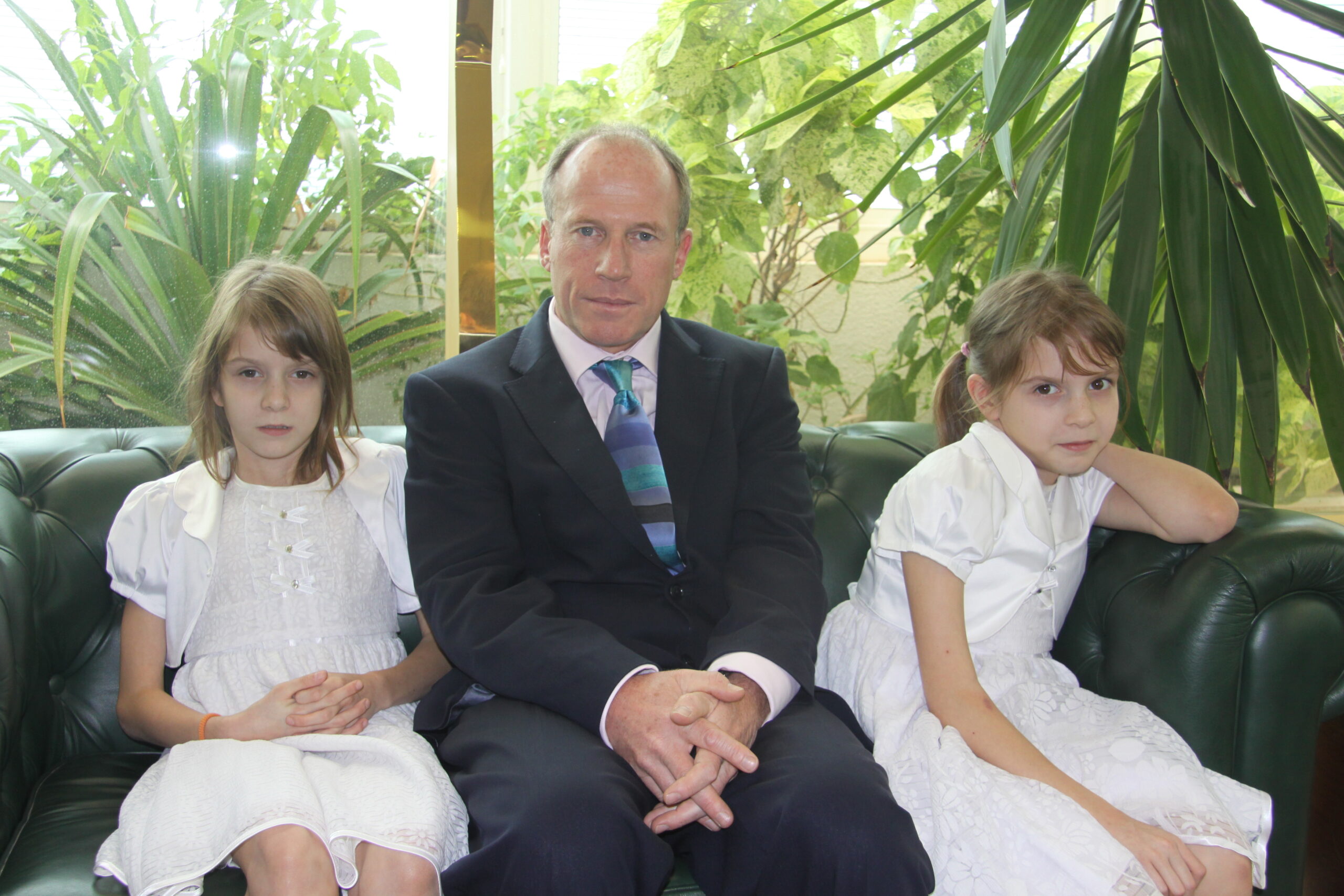 In November 2013 two young girls flew to Riyadh, the capital of Saudi Arabia, for a medical check up. Ten-year-old twins Olga and Daria Kolacz from Poznan in Poland had been looking forward to the trip very much. For them, it was far more than a mere appointment with their doctor. It was a rare chance to see the man who had given them so much more than medical care.

Olga and Daria were born joined to one another at the hip and abdomen, sharing some internal organs. Dr Al Rabeeah had performed a surgical operation on them in 2005 to separate them, giving the baby girls the gift of independence. They were absolutely thrilled to see him again, the man who had given them so much. He too was delighted to welcome them back to Saudi Arabia, as was the Custodian of the Two Holy Mosques King Abdullah bin Abdulaziz, who paid for the operation and personally welcomed them back to Riyadh.

The King has always taken a strong and personal interest in the work of Dr Al Rabeeah and his operations to separate conjoined twins. In the foreword to Dr Al Rabeeah’s book ‘My experience With Conjoined Twins’, he writes: ‘This book documents great medical accomplishments of which we are proud, just as we are proud of many achievements in this beloved country. It highlights a human accomplishment that constitutes an honour to the Kingdom of Saudi Arabia.’

In the twins native Poland, the story of Olga and Daria’s successful separation was widely broadcast and became a nationally celebrated story of medical triumph. It helped to create warm relations between Poland and Saudi Arabia, so that when King Abdullah bin Abdulaziz visited the country in June 2007 he received an enthusiastic welcome, to thank him for his generosity in funding and supporting the twins’ operation.

‘This magnanimity was gratefully acknowledged by every Pole,’ stated the Polish ambassador to Saudi Arabia. ‘The King’s sympathy for the unfortunate remains in the hearts of all Polish citizens.’ The King was presented with a special award – the ‘Smile Decoration’ - by the Polish media and a visit from the Polish Foreign Minister to Riyadh helped to develop plans for cultural, technical and educational cooperation between the two countries, including visiting professorships, scholarships and joint projects in science and academics. ‘Medicine has become an active partner in promoting diplomatic ties,’ wrote Dr Al Rabeeah. ‘The conjoined twins separation experiences have created a new kind of diplomacy.’

‘The smiles of the Polish conjoined twins have strengthened my feeling that our basic responsibility is to build a future of peace and security in which all children are able to enjoy happiness without fear or suffering,’ said King Abdullah bin Abdulaziz. Following this experience, an Arab and Islamic Center was established at Warsaw University in the Polish capital.

Known as ‘conjoined twins’, this medical condition affects one in every 50,000 to 200,000 births, of which around a quarter survive. Until the middle of the 20th century, conjoined twins sharing a vital organ had never been separated, but with the advance of medical techniques and a greater understanding of how organs such as the liver and kidneys work, surgeons began to undertake more complex and demanding operations.

‘In the past, doctors might have attempted to separate twins using crude surgical techniques,’ wrote Dr Al Rabeeah in his book. ‘Today, the separation and treatment options for conjoined twins brings real hope for survival and for enhanced quality of life.’  Indeed, Dr Al Rabeeah has performed at least 31 successful operations, from his first pair – Saudi Arabian twins, separated on 31 December 1990 – through many other Saudi, Sudanese, Somali, Moroccan, Malaysian, Egyptian, Filipino, Iraqi, Cameroonian, Omani, Bahraini, Syrian, Jordanian and Algerian twins, each with their own specific complications and challenges.

In the book, Dr Al Rabeeah describes with the skill of a novelist how he prepares himself for one particular operation, making his pilgrimage to Mecca, placing his faith in Allah Almighty and comforting the distraught and anxious parents.  It was an operation requiring exceptional skill and concentration: two baby girls named Alaa and Walaa share many of their vital organs, including their liver, their intestines, their pancreas and gall bladder canals. ‘This level of multi-sharing placed the case among the rarest worldwide,’ wrote Dr Al Rabeeah.

In an operation that lasted for more than 15 hours without any break, the twins were gradually separated, using ultrasound scalpels and both laser and electrical cauterization to prevent blood loss. To separate the liver took two hours alone, but it was completed successfully, ‘without substantial bleeding, praise be to Allah Almighty,’

Finally, the twins could be placed on separate tables for the first time in their short lives, ready to be taken to intensive care, where they would stay for two months before going back home. ‘At the door to the unit, the father of the girls hurried over to me, then hugged and kissed me as he expressed his joy and happiness. The mother moved to hug her two daughters, the first time she had ever seen them lying in separate beds.’

For Dr Al Rabeeah, as for the King, the programme of operations to separate so many conjoined twins has brought great satisfaction, establishing Saudi Arabia as a centre of excellence in this most demanding a complex area of medicine. ‘The King becomes very attached to these children,’ said Dr Al Rabeeah in a private interview for this publication. ‘We have received children from 17 countries and none of them have had to pay any money for treatment – it has all been paid by His Majesty. He thinks of himself like a father to them.’

Dr Al Rabeeah takes tremendous pleasure from being able to transform a child’s life ‘from misery to happiness,’ and help to make his country a valuable part of the international community. He loves nothing more than seeing twins that he has separated running towards him, after a break of maybe three or four years. ‘It touches me a lot, and my family.’ This is particularly true since Dr Al Rabeeah himself has identical twin girls, though they were not conjoined.